The Beyond Wonderland music festival returns to Southern California in 2023!

Beyond Wonderland is an electronic dance festival organized by Insomniac Events. The event has been held in various locations across the west coast including Seattle, San Bernardino, and Mountain View spanning either one or two days. As the festival continued to grow from its earlier roots, it branched into two festivals, the Beyond SoCal and Beyond NorCal / Bay Area to cater to the growing audience. However, this expansion of the Beyond series lasted for only four years before founder Pasquale Rotella announced that he would no longer continue having both Beyond SoCal and NorCal to pursue expanding and creating other festivals of the Insomniac brand. 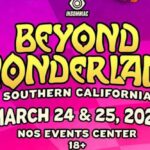