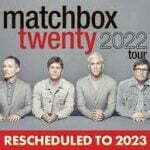 Matchbox 20 announced last February 10, 2022 that the band is moving their spring/summer 2022 North American tour dates to the spring and summer of 2023.

The announcement was made on the band’s Facebook page Thursday afternoon. New tour dates are planned for the spring and summer of 2023.

In addition, Matchbox 20 has been rescheduled to play in St. Louis for Tuesday, June 20, at the Hollywood Casino Amphitheatre.