Static X is an American heavy metal band from Los Angeles, California, formed in 1994. The line-up has fluctuated over the years, but was long-held constant with band founder, frontman, vocalist, and guitarist Wayne Static until his death in 2014. 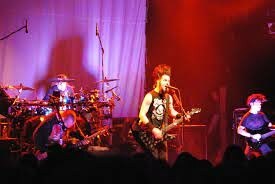 Machine is the second studio album by American industrial metal band Static-X, released on May 22, 2001, and recorded at Studio 508 (Los Angeles, California). When compared to the band’s other albums, Machine features more electronics and industrial effects, and more screamed vocals from Wayne Static. It was also the final Static-X album for eighteen years to feature drummer Ken Jay, and the last for four years to feature lead guitarist Koichi Fukuda, who, despite having already left Static-X, was credited as a keyboardist on the album.

The “Rise of the Machine” tour featuring Static-X, Fear Factory, Dope, Mushroomhead and Twiztid has been postponed to 2023.

Static X North American tour will now begin Feb. 25, 2023 in San Francisco and will loop Canada and the United States before finishing up April 15, 2023 in Los Angeles.